“The Brittas Empire was set in a leisure centre and was about a man who, despite having the best of intentions, always annoyed everyone he came across. It was the fourth sitcom that Richard Fegen and I wrote, and probably the best. It ran for five series between 1990 and 1994 and some of it was seriously good.

It was brilliantly produced and directed by Mike Stephens, had a wonderful cast, and is now available on dvd. The picture opposite is from one of my favourite episodes. Brittas has blown up the leisure centre (again) but emerges as hero after rescuing a small child (played by my son, Johnny).”  Andrew Norriss 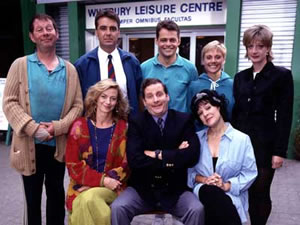 Does Gordon Brittas have Aspergers?

Gordon Brittas is so obviously on the autism spectrum that Tony Attwood used him as an example of someone in the wrong job in his latest book1. Mr. Brittas runs a sports and leisure centre, and although his intentions are honourable, he does not manage his staff or plan his activities well. Mr. Brittas has an unusual, pedantic way of speaking, dresses unusually formally, and has poor social perception skills. He appears to have no friends. One of his staff members expresses that he frustrates her every time she speaks to him because although he has the “important things” right (his ethics and motivation), he fails on what she sees as the basics: social skills and common sense.

Mr. Brittas has a very anxious wife: perhaps choosing this man hoping for some security, not anticipating the numerous disasters which would result from his peculiar way of doing things. The reaction of other people to this widely known community eccentric is a large part of the comedy in these series. Staff members from another leisure centre take a field trip on a regular basis to see Mr. Brittas and experience his unusual behaviour. A local psychiatrist takes a call from Mr. Brittas about another staff member, and is keen to spent time with Mr. Brittas due to the wealth of material in this man.

Interestingly, the DVD extras in the third series of “The Brittas Empire” (Australian ABC release) include a talk show interview between Chris Barrie, the actor who plays Mr. Brittas, and host Terry Wogan. Mr. Wogan describes the character as being odious and unpleasant, perhaps missing the good intentions behind his behaviour. Chris Barrie then defends his character: in playing this man he has come to understand the reasons behind the behaviour many consider annoying.

4 Responses to “The Brittas Empire”