I am a writer’s wife and one of the roles I have taken upon myself is to check online for any mentions of the writer, and that is how I discovered the wonderful writing of Edoardo Albert. I found Edoardo’s reviews of my writer’s books on Goodreads. They were so perceptive and beautifully written with wit, wisdom and originality. In particular my writer was astounded that Edoardo described exactly the way he writes (’with not a single spare word – achieved by boiling the word stew down until only the strongest broth remains’), and picked out the very essence of the story that he had wanted to convey. With delicious serendipity, by passing on our thanks and appreciation to Edoardo via Twitter, a connection was made and we were fortunate enough to discover Edwin and Oswald, Books 1 & 2 in The Northumbrian Thrones Series.

I have to admit to some trepidation when Edoardo generously sent us copies of Edwin and Oswald. We know many writers and I try to read their books, but mostly they are not the style of story or writing that I enjoy and so I keep quiet and have certainly never attempted to write a review. Imagine my relief and great delight when I started Edwin and loved it from the very first paragraph. I immediately felt at home and in safe hands. This was a writer I could trust; beautifully told stories that are so readable; the barest descriptions bringing alive another time and place; characters who feel so real. Without any emotional manipulation I cared about the lives of people from long ago and on occasion wept. Edoardo has the gift, as my writer does too, of writing without long descriptions and yet making pictures in my head. I don’t understand how they do it but it works. I admit to images from Game of Thrones appearing in my head when reading Oswald!

Edwin and Oswald are the best historical fiction; wonderful stories that give a complete view of life in those early times including religion, and the gradual change in beliefs and values. Christianity which has played such a large part in our history is subtly integrated as a natural part of people’s lives. I found it most interesting to read about its introduction and the effect it had on people’s lives and thinking. Oswald is such an interesting character as he wrestles with convention, family and tribal expectations, and the growing feeling that there might better way to live and rule. Beautifully done.

When I got to the end of Edwin in a very short time I was just so pleased to have Oswald to hand. Bernard Cornwall said Edwin ‘leaves the reader wanting more’, and I would add so does Oswald! The only thing that could have made these books better is if there were more of them and I look forward to Oswiu, Book 3 in The Northumbrian Thrones Series in the future.

Edoardo Albert has a great gift for words and story telling that I could never begin to emulate
so enough of me, go and read his books. They are a real treat. @thewriterswife

My review of Edwin

My review of Oswald

Goodreads Reviews of Edwin and Oswald

Goodreads: Edoardo Albert’s reviews of Andrew Norriss’s books, works of art in themselves…

Jessica’s Ghost: ‘So, let’s start a review of Andrew Norriss’s new book by talking about Alan Garner. Yes, that Alan Garner -‘
The Unluckiest Boy in the World: ‘Andrew Norriss is, in fact, The Unluckiest Author in the World. In any sane society a writer who consistently produces such unfailingly delightful books for children would be lauded and applauded, hailed…’
Ctrl-Z: ‘If, in the immortal words of Cher, I could turn back time, what would I do?’
Aquila: ‘Wonderful story. Two boys – united by friendship and a determination to pass through school entirely unnoticed -‘
Aquila 2: ‘Tom and Geoff’s adventures with Aquila, the Denebian escape pod they discovered in the first book, continue.’
The Portal  ‘I’ve now read six of Andrew Norriss’s books and I think I know what his work is about: every story I’ve read has been a drama of the good.’ 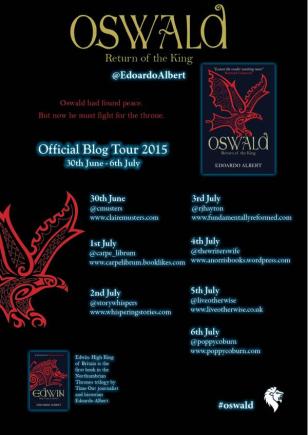 Click on this link Oswald Blog Tour Poster to see a larger clearer version and you will find me on Saturday! I am honoured and don’t feel up to the task but I shall do my best. I shall reveal more anon…

Visits from the Black Dog

Back in the days when I had regular visits from the Black Dog – the phrase Churchill used to describe his occasional bouts of depression – what really pigged me off was the lack of any objective reason for it all. If I had been in chronic pain, or unjustly imprisoned, you could understand it, but I faced nothing like that. In fact one of the worst bouts came when, on any rational basis, I appeared to have everything I had ever wanted. It is called, I am told, ‘endogenous depression’. Depression without any apparent cause.

Alan Garner, in a brilliant essay on the subject, describes how he was overcome one day by ‘the blankness of me and the blankness of the world’ and then spent two years, twelve hours a day, lying curled up on the settle in his kitchen, unable to do… anything. I remember my sense of guilty relief on reading that. How reassuring it was to know that others had been through something even worse than my own experience, and yet survived.

A lot of people go through life without ever meeting the Black Dog, but many of us get to know him all too well. It can start at an early age and is, I am told, affecting an increasing number of children in today’s pressured society. Not that I’d want to use it as a topic in any of my books of course, any more than Alan Garner did. I mean… who’d want to read a book about being depressed?

And then, to my considerable surprise, this was exactly what turned out to be a theme in Jessica’s Ghost. I hope that doesn’t put anyone off, because it’s not as grim as it sounds. If all I had done was express the thought that life can be a bit of a bugger at times, my story would not have been one I wanted to read myself. But, fortunately, my characters were smart enough to find a way out of the abyss and the book is mostly about how they did it.

You don’t have to be an expert on mental health to know there are no slick and easy answers to the problem of depression, but there do seem to be a few consistent signposts to the rescue ladder. One of them is the power of loving friendship. Alan Garner describes how his children would gently stroke the back of his neck as they passed through the kitchen. In my case, the rock on which I rested was my wife. With the young people in my story it’s the support they give each other because they’ve all been to the same dark places and know what it’s like.

It also helps to know that the clouds will not last forever. This may be difficult to believe at the time, but moods are like the weather and the sunshine will one day return. As it did for me. And as it did for Alan Garner, who woke one day to find his depression had vanished as mysteriously as it had arrived. And that is what he reminds himself, when he hears the ‘tinkle of ice bergs’ heralding its possible return. That the mood will pass.

It’s important to remember that.